Have photo booth, will travel: A talented Canberra woodworker and a successful Brisbane business owner form an enduring  partnership to produce breathtaking wooden photo booths for hire.  Steph goes behind-the-scenes with Dunstone Design and The Photo Booth Guys to paint a picture of the collaboration.

Steve — owner of the UK and Australia photo booth hire company The Photo Booth Guys — initially came to Handkrafted when he struggled to find a woodworking company to partner with. He sought an ongoing relationship with an exceptionally talented someone to take over the company’s production of stunning wooden photo booths, ideally in multiple small batches.

To fulfil his requirements, Steve put no limits on the distance he would travel.

“I didn’t know where to start with finding a woodworker,” Steve recalled of his initial search. “I was finding it really hard to find someone that would take on our projects or could understand what we were trying to do, and didn’t think it was a pipedream of mine.”

So, Steve posted a brief and passed the baton to the Handkrafted team, who curated a selection of suitable makers for the photo booth proposal.

“Handkrafted helped me shortlist a bunch of craftspeople that they thought would be able to meet our requirements,” Steve said. “The team spent a lot of time with me just trying to learn more about what I needed.”

Steve desired an artisan who could maintain a high level of detail in the product because he believes this is of the utmost importance to his clients. Above all else, he emphasised wanting the top tier of workmanship for his photo booths.

“In a way, Handkrafted held my hand until we got down to a couple makers that I felt could do the job, and then I met with each of them to make a final decision from there,” Steve commented. “It was really quite a seamless process.”

One of these businesses was Dunstone Design. Steve gravitated towards Evan Dunstone’s meticulous and thorough approach, as well as his input on improvements to the photo booth’s pre-existing model. (The originals were handmade by a talented, retired luthier.)

Evan, too, highlighted Handkrafted’s role in the matchmaking process as advantageous to both parties, since Steve had many expectations met before making the trip to Dunstone Design’s workshop.

Steve had several questions that he wanted answered for his own satisfaction, and described Evan as having gone “above and beyond what he would have expected someone to do even before he outlaid any money.”

He admitted that despite his interest in the photo booths, he had never undertaken such an atypical project.

“It’s not the sort of thing we’d been asked to do before,” Evan stated. But, once he familiarised himself with Steve’s business, and understood what The Photo Booth Guys were after in a product, he realised he could help.

Evan now describes the project as heaps of fun for himself and his team.

Indeed, the photo booths perfectly merge retro appeal with up-to-date technology for a breathtaking and innovative finished product. The various models for hire all exhibit a similar style, but come in a wide range of hues — everything from Silver Ash to Brazilian Mahogany — to suit the customer’s preference, as well as the event’s decor.

“We’re really pleased that we’ve found Dunstone Design as a partner going forward,” Steve gushed. “The depth of the team here has been phenomenal. The quality of the product is amazing and far beyond what we expected.”

“It’s been fun to work with Steve and The Photo Booth Guys in Brisbane,” Evan reiterated. “The fact that we’re in Canberra and they’re in Brisbane doesn’t seem to be a hindrance at all. I think it is a really good fit, and Handkrafted made that possible.”

“I really am excited to be working with Dunstone Design going forward. We have a clientele that appreciate a high-quality product,” Steve echoed, “and I know that we’ve got that with these guys.”

Check out this nifty promo video by The Photo Booth Guys featuring their gorgeous photo booths:

Handkrafted has brought together Australia’s most comprehensive community of independent bespoke furniture makers. With over 200 craftspeople available, we will match you to the right maker for your custom furniture project. 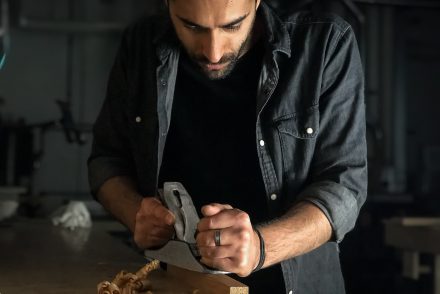